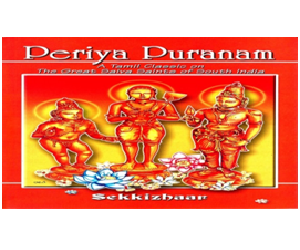 Sekkizhar  wrote the Periya Puranam after getting the divine blessings of Lord Shiva, and he served as a poet and minister in the court of the Chola King, Kulothunga Chola, and the king  was also a staunch devotee of Lord Siva, and he used to worship Lord Nataraja at Chidambaram, and he also renovated many ancient temples of Lord Shiva. For some time, Kulothunga followed the principles of Jainism, but after the compilation of Periya Puranam by Sekkizhar, the king had changed his mind, and become an ardent devotee of Lord Shiva. During his old age, king Kulothunga went to the forest, performed penance on Lord Shiva and attained salvation. In the holy text, Periya Puranam, Sekkizhar had explained the life history of Nayanmar saints in a simple manner, and he also praised the celebrated Sundaramurti Nayanar, and mentioned his devotion and his close relationship with Lord Shiva.   Sekkizhar wrote the Peirya Puranam in the Thousand Pillared Hall of the Chidambaram temple. After the completion of Periya Puranam, Lord Shiva itself acknowledged his work and gave darshan before Sekkizhar, and blessed him.

The Periyapuranam is considered similar to the Holy Vedas, and it is read by millions and millions of Shiva devotees throughout the world. All the Nayanmar saints lived their life with great devotion on Lord Shiva, and they also won in the tests conducted by Lord Shiva, and finally they had reached the abode of Lord Shiva, The Holy Kailasa.