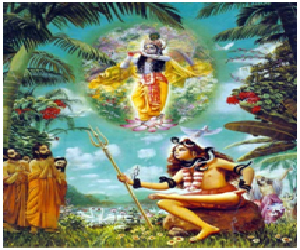 Pracheena  Barhis was the king of the Pruthu Kingdom. His ten pious sons were known as Prachethas. Pracheena Barhis had asked his sons   to get married, in order to produce noble children. As per the wishes of their father, his sons went to a sacred place in order to do meditation. There they had got the darshan of Lord Rudra, a form of Lord Shiva, and worshipped him. In order to make them into pure, Lord Rudra had taught the popular Rudra Gita to them, and asked them to recite it regularly in order to fulfil their wishes.

Rudra Gita is the salutations offered by Lord Shiva   to Vishnu.

The contents present in the holy Rudra Gita is as follows:-

Oh Lord Vishnu, you always exist in the souls of the noble people, and only the great saints and sages would be able to know about your significance, and I offer my humble salutations to Lord Vishnu, who is the best among all other gods.

My Salutations to Lord Vishnu, who is having the Chanku, Chakra and the divine mace held in his hands.

Lord Vishnu is also known as Achutha, Ananta, Govinda and Vasudeva, and by several other names.

Lord Vishnu could take the form of even a small dust particle, as well as he can take a gigantic form covering the entire universe through his supreme powers.

He is the one, who is without emotions and there is no end for him.

He is the one who creates, protects and destroys the universe.

I   salute the great Lord Vishnu, who gives self-control to us, removes our ego and bad habits like lust, greed and anger, and also purifies our mind.

He is the one who is in the form of Sun and the Moon, and all other planets in the sky.

He is the one who grants various boons to his devotees, and makes them to permanently stay in his abode.

He is the one who spreads light   everywhere, and I offer my humble Salutations to Lord Vishnu who is worshipped even by Lord Indra, the king of heaven.

My humble Salutations to Lord Vishnu, and he gives food to the hungry and poor people and also quenches their thirst by giving water to them.

Salutations   to God, who exists in all the worlds and he is the “MARVELLOUS GEM” among the gods.

Salutations to the God, and he is the one who grants great strength to the bodies and minds of the people in the earth.

Salutations to the God, and he is the one, who removes the sins and diseases of the people, and grant liberation to them.

Salutations to the one, who contains a handsome face, his body is filled up with full of golden ornaments, and he shines like that of the bright sun.

Your body resembles like that of the beautiful Manmada, and your chest is shining   due to the divine presence of your lovely consort Ma Lakshmi, and you are very kind to your staunch devotees like Prahalada, Narada, Dhruva and Tumburu.