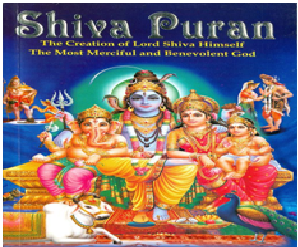 The Shiva Purana is one of the eighteen Puranas, and it is considered as an important Sanskrit text in Hinduism, which was written by the great sage Sri Veda Vyasa, with the help of his disciple Romaharshana, and it tells about the importance of Lord Shiva and about Mata Parvati.

By reading Shiva Purana, we would know about the greatness of Lord Shiva, his powers, defeating and destroying of demons by him, and about his miracles performed to his devotees.  The Shiva Purana invokes the “SHIVA BHAKTI” in the minds of the readers, and through that they can develop strong faith on Lord Shiva.  According to Shiva Purana, Lord Shiva is considered as the creator, protector and the destroyer of the entire universe, and there is no beginning or end for him. In Shiva Purana, bhakti is considered as the main aspect to attain salvation. Anyone who has sincere bhakti on Lord Shiva would be able to attain his lotus feet. Ancient Nayanmar saints were lived as per the principles of Shaiva Siddhantha, they kept sincere faith on Lord Shiva, and they were ready to even sacrifice their lives for the sake of Lord Shiva.

In Shiva Purana stories about Shiva devotees is mentioned. It also mentions the significance of sacred ash, the Holy Rudhraksh and the Vilva Leaves. Ancient people used to narrate stories from Shiva Purana to their children, in order cultivate Shiva bhakti to them at their younger age itself.  The great Vishnu Avatar, Sri Parasurama, is an ardent devotee of Lord Shiva, and it is believed that he still meditates on Lord Shiva in the Himalayan Mountains. Shiva Puran books are available in all the leading book shops and also are available at amazon. At this present situation, reading Shiva purna would cleanse our mind, removes our diseases and sins, and makes us to focus our attention on Lord Shiva.