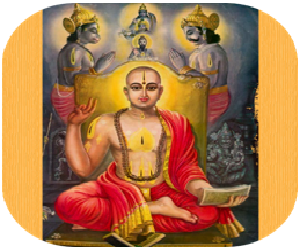 The Vayu Stuti is one of the popular poems written by the learned scholar Sri Trivikrama, who was the disciple of Guru Madhwacharya. This sacred text was written  in praise of Sri Madhvacharya, the founder of Madhwa community. Sri Madhvacharya, is believed to be an incarnation of Lord Vayu and he has proved it in many circumstances during his lifetime.

In this poem, the important qualities of Lord Vayu are mentioned, about his avatars, his enormous powers, and his great devotion on Lord Vishnu. Whoever recite the Vayu Stuti, must recite the Narasimha Stuti also, since it was instructed by Sri Madhwacharya himself. Lord Vayu contains super natural powers, and only through his presence, we are all surviving in this world. Without breathing, we could not live in this world, and we could not discharge our duties properly. Lord Vayu makes us to breathe properly, and through his avatars, he invokes the “VISHNU BHAKTI” amongst the people.

Madhwacharya is a great saint, and it is believed that he is still living in the Bhadrikashram, and serving his Guru Sri Vedavyasa in a pleasing manner. Since he is still alive, there is no Jeeva Samadhi built for him. Through his blessings and his valuable teachings, Madhwa Saints like Sri Vyasaraja and Guru Raghavendra have shined brightly, and they have become great scholars, and they have also spread the teachings of Guru Madhwacharya amongst the masses.