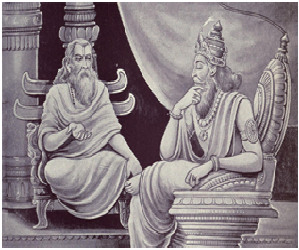 Vidura is one of the main characters in Mahabharata. He is the prime minister of the Hastinapura Kingdom and the brother of the blind King Dhritarashtra. He is considered to an incarnation of Lord Yama Bhagavan, the death god, and lived his life in a righteousness manner.

Vidura was the son of Sage Vyasa and Parishrami, a pious maid. He was highly respected by the Pandavas and Lord Krishna for his good manners.  He also safeguarded the Pandavas from the attacks of Kauravas, and acted as a godfather to them.

Vidura neethi was written by Vidura, and it is considered as the best teachings for the people. The details are as follows: