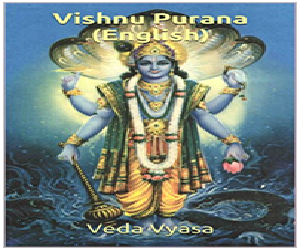 The Vishnu Purana is one of the eighteen Mahapuranas, and it is considered as a holy text of Hinduism. It contains the details of Lord Vishnu, his avatars and about his famous devotees like Narada, Prahalada, Thumburu and Dhruva.

According to Vishnu Purana, Lord Vishnu is considered as the main god and all the other gods and goddesses are considered as demi gods and demi goddesses, and they obeys his orders and acts as per his instructions, and through his supreme powers he is controlling the entire universe.

This famous Vishnu Purana was written by Sri Vedavyasa, who is also an AMSHA of Lord Vishnu. This purana also mentions about Lord Brahma and Shiva, and about other Devas like Varuna, Indra and Kubera. In Vishnu Purana, Rishi Maitreya and his guru, Parashara, tells us about the significance of Lord Vishnu, and about his Yoga Nidhra, a type of meditation.

In this Purana, Lord Vishnu is called as Hari, Janardana, Madhava, Achyuta, Madhusudhana, Jaganatha, Padmanabha, Dhamodara, Hrishikesha and by various other names. By chanting his slokas and by reciting the Vishnu Sahasranama, we would get mental peacefulness, we would be free from our sins and diseases and we would get divine enlightenment.

In this Purana, the story of Bhakta Prahlada is mentioned, and the details about his devotion on Vishnu, harm caused to him by his father Hiranyakasipu, and about the protection given to him by Lord Vishnu.

Lord Vishnu can be realized from our soul by performing meditation on him. Great rishis and kings had attained his lot feet by performing meditation on him. Through his grace, Dhruva had become a divine star, and brightly shining in the sky. Similar Bhakta Prahalada had become the famous saint, Guru Raghavendra, and after the end of Kali Yuga, during the next Satya Yuga, he would become the next Manu, and would make wonderful creations in the universe.

Let us develop the habit of reading the great Vishnu Purana at least once in a week, and be blessed.