In: Mathematics, Vedic Sciences
With: 0 Comments 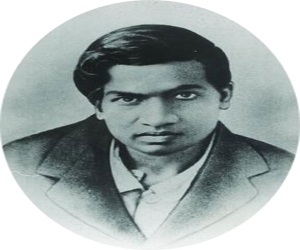 Srinivasa Ramanujan (1887-1920), was born in Erode in the year 1887, and he was a famous mathematician whose contributions in the field of Mathematics helped lot of mathematicians to solve their problems easily. At his young age itself, he used to study Mathematics related books, and quickly grasped various calculations and theorems.

Due to his ability, he was highly praised by the Mathematics professors and by the common people. Apart from studying Mathematics, he was a staunch Vishnu devotee, and he used to frequently visit the Vishnu temples, and offer his prayers.

He was married in the year 1909, and in order to maintain his family, he worked as a clerk in the Madras Port Trust, and simultaneously continued his research work in Mathematics. He has invented new methods and formulas in Mathematics, in order to make the people to easily learn the Mathematics subject.

In the year 1911, Ramanujan published his research papers in the Mathematical Society, and his papers were duly recognised, and he became an assistant to the British mathematician Hardy and he also received grants from the Trinity College, Cambridge.  Ramanujan’s mastery in Mathematics was very excellent.

He worked out the complicated Algebras, found solutions for the calculus, and invented new techniques for solving the difficult problems. He went to England and done lot of research works. His presentations were published in various foreign journals, and he became a famous mathematician, and was highly appreciated for his efforts, and got a good job in England.

But in the year 1917, since Ramanujan had suffered from tuberculosis, he returned to India. But even after getting good treatment in the hospital, Srinivasa Ramanujan died in the year 1920 at Kumbakonam.