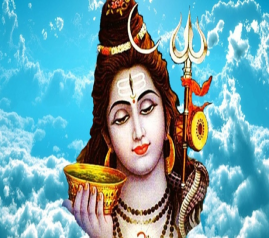 Shiva Bhujangam is a wonderful Stotra written in praise of Lord Shiva by Sri Adi Shankara for the sake of the universal Peace and Prosperity.  Though this was written before several hundreds of years, yet, this powerful stotra is still recited by millions and millions of Shiva devotees in their homes, in order to get the ultimate blessings of Lord Shiva. Sri Adi Shankara is considered as an incarnation of Lord Shiva, hence, by reciting this stotra, we would get the entire grace of Lord Shiva, and our life would prosper. Reciting the contents from this stotra is like drinking the divine nectar from the heaven.

The contents present in this excellent Stotra are as follows:-

I pray to the Ekadanta who is the beloved son of Lord Shiva,
Whose beauty cannot be described by the ordinary humans,
and he is the one, who is capable of protecting us from dangers.

I meditate on the great Lord Shaiva,
for whom there is no beginning or end,
he is the form of Vedas,
and he is the master of the universe.

I salute the Lord, who contains five faces,
who sits on his beloved Nandi Vahana,
who wears snakes as ornaments,
who contains matted hair, who has kept Moon and the holy River Ganga on his head and
whose beloved consort is Ma Shakti Devi.

I meditate on Lord Shiva, who is also called by various other names such as Ishana,
Veerabhadra, Eswara, Kala Bhairava, Rudra and many more.

I meditate on Lord Shiva, who gives permanent happiness to us, and he is the one, who looks like a Holy Rishi.

I salute the lotus feet of Lord Shiva,
which is adorned  by
beautiful and fragrant flower garlands, and he is always worshipped by Devas like Indra, Varuna and Agni, and he is the one who contains unlimited powers.

Hey Lord Shiva, you are the god of the gods, and you are the first and foremost Rishi, please make me to involve myself to concentrate on you and you only, Please take me to your abode after my death, and relieve me from the repeated birth cycles.

Hey, Lord Shiva, you are also known as the third-eyed god, you are the one, who had destroyed even the death god Yama, and saved your devotee Markandeya from death, please forgive all of my mistakes, and give me a fresh life.

Oh My Lord Shiva, you are the one, who wilfully drank the Halahala poison by considering it as the divine nectar, in order to safeguard the entire universe from destruction.

Oh Lord you are the god of the Kailash mountain, you are also the Lord of the Holy City Kasi,
and you contain innumerable temples in the holy earth.