In: Architecture, Vedic Sciences
With: 0 Comments

There are several aspects of town planning – construction of roads in towns and in mountainous terrain, planning the course of roads and regulating the construction of houses – like mandatory spacing between houses. There are examples of each of these in ancient Sanskrit literature. 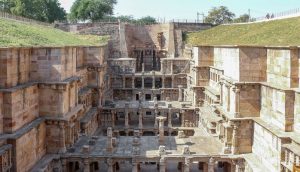 The surface of a road should be made like the back of a tortoise, along with culverts by the villagers. The kings should dig drains in the sides for the drainage of the water.

Diligent kings should, every year, with unemployed villagers, break the roads and bind them with lime and gravel. 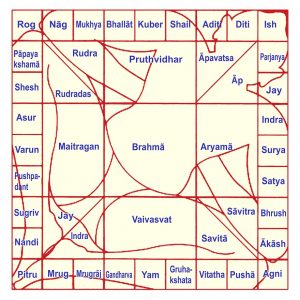 The mountain roads should be twice or thrice as broad as the roads in plains. Streams could have small or large bridges.

The road on the culvert must be made hard by compressing stones and brickbats under the legs of elephants and horses.

John Loudon McAdam (born September 21, 1756 In Ayr, Scotland; died November 26, 1836 in Moffat, Scotland) was a Scottish engineer and road-builder. In 1823 AD, he invented a new process, “macadamization”, for building roads with a smooth hard surface that would be more durable and less muddy than dirt-based tracks.

For a moat of 4 danda depth, from the moat a rampart of 6 dandas height should be built. The support beam (of the rampart) should be twice (the height). It (the rampart) could be

• Mancaprstha one of constant width or

• Kumbhakuksika one having more width at mid-height. By elephants and bullocks (the earth) should be compacted. Thorny bush, poisonous low spreading creepers (should be planted). With the remaining earth, fill the cracks in the construction. 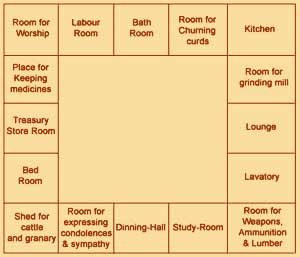 = Straight and of even width.

= Like the interior of a pot, burgeoning in the middle.

The Dam – The Grand Anicut, Kallanai, located on Cauvery River in Tamil Nadu, is the oldest dam in the world that is still in use today. This masonry dam was built in the 2nd century AD by Chola king Karikalan. It was remodelled and fitted with sluice gates in 1899 – 1902.

A village known as swastikam shall have a Swastika road formation (meeting of four roads). Six streets go east and north. The roads reaching these six are in the outside.

(In the periphery) As mentioned earlier, the street layout would be a road junction. The east and north roads shall be only 4.

Swastika is a scheme of parallel roads of cities, the layout of principal roads forming a Swastika. The features of the Swastika format are:

• The central districts would have 6 roads running North-South and 6 roads East-West.

• In the periphery, there would be only 4 roads in each direction.

• In the periphery, all roads would turn in the clockwise direction.

The obvious benefits of such an arrangement are:

• The plan provides higher road density in the central part of the town compared to the periphery, which would correspond with the traffic density in any city.

• The roads permit one-way traffic in each direction.

• The arrangement discourages traffic skirting the city from going through the central part of the city.

Town Planning – Law for housing given by Kautilya

While Kautilya lays down the rules, in the last sentence, he places the onus of doing well and avoiding the undesirable on the community of house-owners.

The houses had bathrooms, the design of which shows that the Harappan, like the modern Indian, preferred to take his bath standing, by pouring pitchers of water over his head. The bathrooms were provided with drains, which flowed to sewers under the main streets, leading to soak-pits.

The sewers were covered throughout their length by large brick slabs. The unique sewerage system of the Indus people must have been maintained by some municipal organization, and is one of the most impressive of their achievements. No other ancient civilization until that of the Romans had so efficient a system of drains.