In: Vedic Universities
With: 0 Comments

Education is one of the main pre requisites for the growth and development of a country. It is the means that builds a person’s mental and moral make up. Through favourable environment, education provides scope for expression and expansion of an individual.

Achievements in all fields like healthcare, agriculture right upto private sector growth have been possible only due to the development of the human mind. Education is the main tool to unleash this potential of the human mind. There is a tendency not only in India but across the world to assume that education is somehow a Western contribution to the world. The last millennium reflects this view with top notch Universities around the world producing Nobel Laureates and pioneers in various fields. But it is inspiring to remember that in the field of education, India has an even longer standing.

Ancient India did not have organised public institutions for education for several centuries. There were individual teachers who took up the task of education. There were no public schools or colleges. Hindu temples were generally the centres of education with the local Kings and rulers giving them suitable grants and favours for dissemination of religion, temple activities etc. It was only in connection with Buddhist monasteries that corporate educational organisations were first evolved. Novices who entered into the Buddhist monasteries were required to be trained for ten years hence the Buddha emphasised on the importance of imparting systematic education to them. From the time of Ashoka onwards Buddhist monasteries became big institutions and first they formed centres of education only for the monks and nuns but later on allowed the lay population also to join these institutions. Thus came into existence the First University of the World-the Nalanda University.

Nalanda and its History 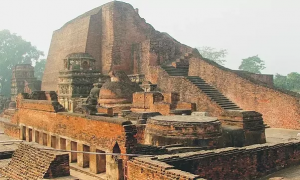 It is said that during the early 5th century the Nalanda University which came to be known as the ancient centre of higher learning was built in the Kushan architecture style by Shakraditya of the Gupta dynasty in modern Bihar. It is 90 kms South of Patna and 62 kms from Bodhgaya. It is half an hour bus ride from Rajgir, a city in Bihar which was said to be the first capital of the Kingdom of Magadha which eventually evolved into the Mauryan Empire.

It flourished from 427 to 1197 though its initial period was of growth, development and finally reaching its peak and the latter period was gradual decline and final dissolution.

It had a lofty wall and one gate, eight separate compounds, ten temples, classrooms, meditation halls, lakes and parks, a library, dormitories for students and accommodations for teachers. An account written states that, it had an azure pool around the monasteries with blue lotuses in it. Dazzling red flowers of the kanaka hung everywhere and mango groves offered shade and protection to the inhabitants.

It was a Pan Asian residential University ie students studying here came from all over Asia. Contributions and support for it came from others including Hindu Kings like Emperor Ashoka and Harshavardhana. The Nalanda University was favoured by the state and its rulers. A succession of Guptas and other rulers richly endowed it. It owned a hundred villages which yielded rich revenues. Thus the authorities at the University could provide free boarding, lodging, medicine and clothing to many lay students who were deserving but could not afford to pay the stipulated fees.

Information about the University during the 6th and 7th centuries has been recorded by Chinese travellers and pilgrims Hiuen Tsang and I-Tsing who said that initially there were a thousand students which steadily began growing and at one time there were supposed to be nearly ten thousand students studying there. Buddha is said to have come here often with Moggallana and Sariputra two of his chief disciples.

Nalanda University attracted students from all over the world, from Japan, Thailand, China, Korea, Indonesia and the rest of Asia. A few came from even as far as Turkey. It is said that Yi Jing a student from China who studied at Nalanda University was the first author in the ancient world who wrote a book comparing and assessing the medical systems between the two countries of India and China. Even in the ancient history of China it is mentioned that only Nalanda offered higher education outside China. Fa Hsein, I-Tsing and Yuan Chwang were some of the Chinese scholars who learnt at Nalanda as its fame as a centre of learning spread widely. Many other scholars like Aryavarman, Hwui Lu etc visited Nalanda either for higher studies or procuring rare manuscripts. It is said that the standard of admission was very high as only those who were well versed in old and modern learning were admitted, thus those who were beaten by the schools of discussions that took place withdrew. Only 2 or 3 out of 10 succeeded.

Excavations show that the University had some rooms which had single seats and some which had double seats. There were stone cots for sleeping in each room, a niche for lamp and to keep books etc. Each monastery had huge hearths or chullas indicating common mess arrangements. Rooms were assigned according to how senior the student was and this was assessed and redistributed every year. There was a bow marked floor seen in the entrance of many viharas in the ruins, the royal sign of the Guptas being the bow. The great archeologist Alexander Cunningham in the 1860s examined the ruins and identified the site as Nalanda University and The Archeological Survey of India in 1915-1916 began excavations of the site.

Only a small part of the entire site could be excavated to date as much of the ruins are beneath villages and are not likely to be revealed unless there is a mass evacuation and relocation of the existing villages elsewhere which is not possible. The architectural components of the ruins show the holistic nature of knowledge imparted there which depicts the seamless coexistence between living and learning and between nature and man. Scholars and teachers who studied at this University had left information and other records about the architecture, ambience and learning of this great university. At the time Nalanda University ceased to exist, the great universities in the Western World came into existence, thus production and dissemination of knowledge shifted from the East to the West.

It was only six hundred years later that the first European University Bologna in Italy was founded in 1088.

The curriculum taught there was not only Buddhist literature, religion and philosophy but also on the Vedas and other books like Chikitsavidya on medicine, Shabdavidya on grammar, Hetuvidya on logic, Atharvaveda which were works on magic and the philosophy of Sankhya. Religion, linguistics, medicine, law, public health, architecture, sculpture, history, mathematics as well as astronomy were taught. A Chinese scholar Xuangzang who studied in Nalanda mentions about a tall observatory present there for the purpose of astronomy. Great emphasis was placed on the Mahayana system of Learning.

A high level of discipline and punctuality was maintained as can be observed from the presence of a water clock. Hsuan Tsang was the pupil of the Rector who was Monk Shilabhadra at that time followed by monk Dharmakirti. Before Shilabhadra the Rector was monk Dharmapala of Kanchi. At any point of time the teachers could explain a sizeable collection of Sutras. Teaching was carried out in groups from morning till sunset and the method adopted by the teachers was the Seminar system of questions and discussions. After the study period was over, the award ceremony was conducted and taking into account their social status and merit, degrees were awarded.

To meet the demand of hundreds of teachers and students who were engaged in the study of various subjects the Nalanda authorities maintained a very good library as they felt that a University without a library was like a castle without armoury. The library was situated in a special area called Dharmaganja meaning mart of knowledge and built of stone. It had three huge buildings Ratnasagara, Ratnaranjaka and Ratnadadhi. Ratnasagara held the collection of rare and sacred  manuscripts like Prajnaparamita Sutra, the Samajguhya etc and was a nine storeyed building. The towers were bejewelled, gilded and immense in order to reflect the sun’s rays. But at the end of the twelfth century the library was burnt by Bhaktiyar Khilji a Turk and his army in his attempts to uproot Buddhism. It is said that the library burnt for months and thousands of manuscripts were burnt and even though later efforts were made to restructure and remodel it, it could never regain its original glory or quality.

The Present site is pleasant to visit and well maintained. There is a small museum across the street with excellent Buddhist statues. 349 antiquities are displayed here. The sculptures are made of stucco, terracotta, stone and bronze but majority are carved on basalt stone. Most of the images are of Buddhism though there are some on Jainism and Hinduism also. The central part of the hall shows a scaled model of the excavated remains of the Nalanda University. There is a temple dedicated to Hsuan Tsang about a kilometre away. The International Centre for Buddhist Studies and the Nava Nalanda Mahivihara set up for the research of Buddhism are situated nearby.

The Parliament Of India in 2010 passed a bill to restore the ancient Nalanda University to a modern Nalanda International University for higher education. Many countries of East Asia like Singapore, Japan and China have agreed to help fund this construction and make efforts to restore it to its former glory.

The uniqueness of Nalanda University was its ability to embrace knowledge in its entirety and to blend the Buddhist and Non Buddhist heritage that was characterised by Ancient Magadha at that time thus proving attractive to all seekers of pure knowledge and establishing it as an undisputed seat of learning.