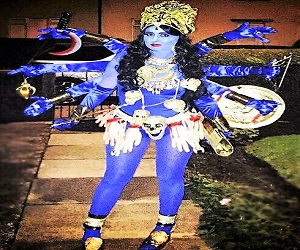 Katie, Director of Wild Thing, in an email to distinguished Hindu statesman Rajan Zed who spearheaded the protest, wrote: …we would like to profusely apologise to you and the Hindu community for any upset this item caused. We were deeply saddened to hear that this item was ever added to our online platform, and we are actively putting in place measures to ensure that items such as this, will not be added again… we removed this item as soon as we were aware of it being on our site.

Zed, who is President of Universal Society of Hinduism, in a statement in Nevada (USA) today, thanked Wild Thing and Katie for understanding the concerns of Hindu community, which felt that such a product was insensitive.

Rajan Zed suggested that companies like Wild Thing should send their senior executives for training in religious and cultural sensitivity so that they had an understanding of the feelings of customers and communities when introducing new products or launching advertising campaigns.

Zed had said that goddess Kali was highly revered in Hinduism and was meant to be worshipped in temples or home shrines and was not an outfit to be paraded around or flaunted or parodied/mimicked or thrown around loosely at Halloween or fancy-dress parties for dramatic effects to entertain.

Rajan Zed had emphasized that inappropriate usage of sacred Hindu deities or concepts or symbols or icons for commercial or other agenda was not okay as it hurt the devotees.

Clothing companies should not be in the business of religious appropriation, sacrilege, and ridiculing entire communities. It was deeply trivializing of immensely venerated goddess Kali to be displayed like this, Zed had stated.

Zed had indicated that such trivialization of Hindu deities was disturbing to the Hindus world over. Hindus were for free artistic expression and speech as much as anybody else if not more. But faith was something sacred and attempts at trivializing it hurt the followers, Zed added.

In Hinduism, Goddess Kali, who personifies Sakti or divine energy, is considered the goddess of time and change. Some Bengali poets described her as supreme deity.

Before removal, description of this objectionable Kali Costume, priced at £480, stated: “Be the Queen of Halloween in this epic Kali Costume”. “Make Noise Through Fashion” is the tagline of Wild Thing, an online firm which describes itself as: “our marketplace is for you if you like edgy, stylish and on-trend clothing”. It claims to plant a tree for every order it receives.