In: Festivals Of The Month, Newsworthy, World News
With: 0 Comments
Dedicated to lord Surya and Chhati Maiyya (Usha, lord Surya’s wife), Chhat puja is an ancient Hindu festival. It falls on the sixth day of the month of Kartika (October/November) and hence the name ‘Chhat’. It is celebrated to thank lord Surya for sustaining life on Earth. People worship the sun God very passionately and offer him prayers for the well being of their family. It is celebrated mainly in the states of Bihar, UP, Jharkhand and some parts of Nepal. This year, it starts on 4th November and continues till 6th November.
The ritual starts on the fourth day of Kartika month with people bathing in the holy water of Ganga to purify themselves. This day is called ‘Nhay Khay’. Devotees first take a bath, eat something before the fast starts, which then continues for the next 36 hours. The third day of the ritual (the main day) is the day of offerings to lord Surya. It is known as ‘Sandhya Argh’ as all the rituals take place in the evening. Devotees stand in water for long hours and pray for their family and loved ones. The fourth and the final day, also known as Suryodaya Argh is the day to offer early morning prayers to the God of life and energy followed by the breaking of fast.
During these four days, the whole city, especially the Ghat area is swept clean. It is the festival of purity and is considered one of the most difficult festivals due to its long hours of fasting without water. The Prasad and the fasts food for all four days are prepared using the holy water of Ganga. It is one of the most pure and devotional festivals celebrated among people of Hindu religion. 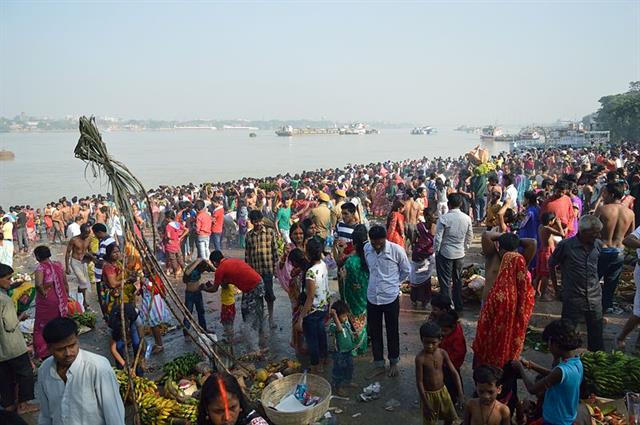