Calling it a step in the positive direction, distinguished Hindu statesman Rajan Zed, in a statement in Nevada (USA) today, said that as love and peace lied at the heart of all religions, they should work together to build mutual trust and understanding, highlighting the commonalities.

Zed, who is President of Universal Society of Hinduism, pointed out that as religion was highly powerful; we should take it seriously and have a broader and more inclusive understanding of it in a multi-faith society like England.

Rajan Zed indicated the despite seriously different traditions, religions should learn to live together in harmony, loyalty and trust. Dialogue would bring us mutual enrichment and help overcome the prejudices.

Church of England being official church of England, Zed urged Archbishop of Canterbury Most Reverend Justin Welby to take the lead in launching a national dialogue among religions. As people with no-religion had substantial presence in England, Zed also urged Welby to invite and include them also in this dialogue.

Diwali, the most popular Hindu festival, aims at dispelling the darkness and lighting up the lives and symbolizes the victory of good over evil.

Diwali was celebrated in Sacred Heart Church Wimbledon, which is one of the largest Catholic parishes in England. Canon John Clark and Father Joseph Donkor are Parish Priest and Priest in Residence respectively. 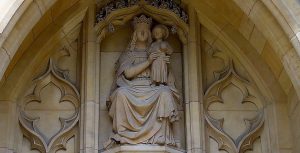