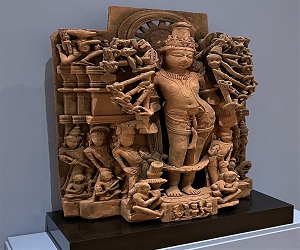 Hindus have commended Emory University in Atlanta (founded by Methodists and which maintains a formal affiliation with the United Methodist Church) for student-curated “The Avatars of Vishnu” exhibition in its Michael C. Carlos Museum, which will continue till June 20.

Welcoming Emory University for exhibiting avatars (incarnations) of highly revered Hindu deity Lord Vishnu, distinguished Hindu statesman Rajan Zed, in a statement in Nevada today, said that art had a long and rich tradition in Hinduism and ancient Sanskrit literature talked about religious paintings of deities on wood or cloth.

Hinduism, oldest and third largest religion of the world, has about 1.2 billion adherents and moksh (liberation) is its ultimate goal. There are about three million Hindus in USA. In Hinduism, Lord Vishnu is “preserver” in the Hindu triad with Lord Brahma and Lord Shiva as the aspect of the Supreme. He has ten incarnations to establish dharma (divine law).

Michael C. Carlos Museum of Emory University, claimed to be “one of the premier museums in the Southeast” with “world-class permanent collections”, was formally established on Emory’s Atlanta campus in 1919 (although its history goes back to 1876). It states to foster “understanding of diverse religions and civilizations” and Dirk Brown and Ed Snow are its Board Co-chairs and Bonna D. Wescoat is its Interim Director.