Distinguished Hindu statesman Rajan Zed, in a statement in Nevada (USA) today, said that inappropriate usage of Hindu deities or concepts or symbols for commercial or other agenda was not okay as it hurt the devotees.

Zed, who is president of Universal Society of Hinduism, indicated that Shakti (or Devi—a general term for the Goddess as supreme/principal/absolute deity; which include Durga, Lakshmi, Kali, Saraswati, etc.) was highly venerated in Hinduism since Vedic times and was meant to be worshipped in temples or home shrines and not to be used in selling beer.

It was deeply trivializing of immensely revered Goddess to be portrayed on a beer label like this, Zed stated.

Goddesses find mention in Rig-Veda, the oldest of Hinduism’s extant texts. Texts such as Devimahatmya, etc., glorify the Goddess as the supreme being and detail her all-pervading primordial powers.

Walhalla describes year-round extra-strong Shakti as “the beloved beer of the mother goddess Shakti” … “mysteriously smooth and overwhelms you with seductive hop aromas” … “Gold & Hoppy; Bitter & Sweet; Full & Strong”. It is apparently available in can, bottle, “on tap” and “in the tanks”. A Shakti bottle online was priced at €2.99. 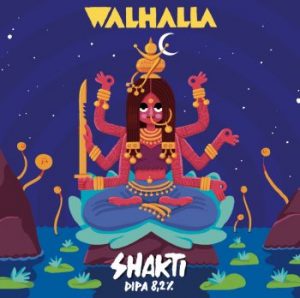