“Prepare to get stunned with the Hindu mythology inspired slot… where Divine Power rules… Embracing the majestic story, the Players will enjoy the game attempting to spot the expanding wild featuring Durga riding the Lion”, the description states.

Distinguished Hindu statesman Rajan Zed, in a statement in Nevada (USA) today, said that inappropriate usage of Hindu deities or concepts or symbols for commercial or other agenda was not okay as it hurt the devotees,

Zed, who is President of Universal Society of Hinduism, urged Endorphina and its CEO to publicly apologize and immediately recall this slot game showing image of Hindu goddess Durga. Associating goddess Durga with gambling was very insensitive.

Rajan Zed pointed out that goddess Durga was highly revered in Hinduism and was meant to be worshipped in temples or home shrines and not for inducing susceptible public to online gambling for the mercantile greed of an international company.

Hinduism was the oldest and third largest religion of the world with about 1.1 billion adherents and a rich philosophical thought and it should not be taken frivolously. Symbols of any faith, larger or smaller, should not be mishandled, Zed noted.

Rajan Zed is also urging the intervention in this matter of Malta Parliamentary Secretary for Financial Services Silvio Schembri, Malta Gaming Authority (MGA) Board Chairman Joseph Cuschieri and MGA CEO Heathcliff Farrugia. MGA should act as its “activities” include “Monitoring licensed gaming” and its “aims’ include “Ensure the integrity of games and gaming devices”, Zed added.

Zed also suggested Endorphina’s partners/clients, like SoftSwiss Casino Software and BetConstruct (online gaming & sports betting platform), to persuade it to send its executives for training in religious and cultural sensitivity and do thorough homework before designing new products.

Lion is Wild Symbol in this game, while Mahisha (described as “horned devil”) is the Scatter Symbol who “might grant you with Free Games”. Besides multi-armed Durga sitting on a lion, this game also depicts various other Hindu symbols like trishul, shankh, ghanta. In Hinduism texts, Mahisasura was the buffalo demon whom Durga destroyed. Lion is Durga’s vahana (vehicle).

Durga, highly worshipped Hindu goddess, is considered savior of the world from evil. Moksh (liberation) is the ultimate goal of Hinduism.

Awards-winning “Endorphina is a software provider that offers a wide range of flash-based slot games for online casinos” which provide “real thrill of gambling”. Endorphina is “registered under the laws” of Malta at an address in Birkirkara, and its “operations are regulated by the Malta Gaming Authority” “under the license”. It defines its products as “appealing to the players and profitable for the operators”. 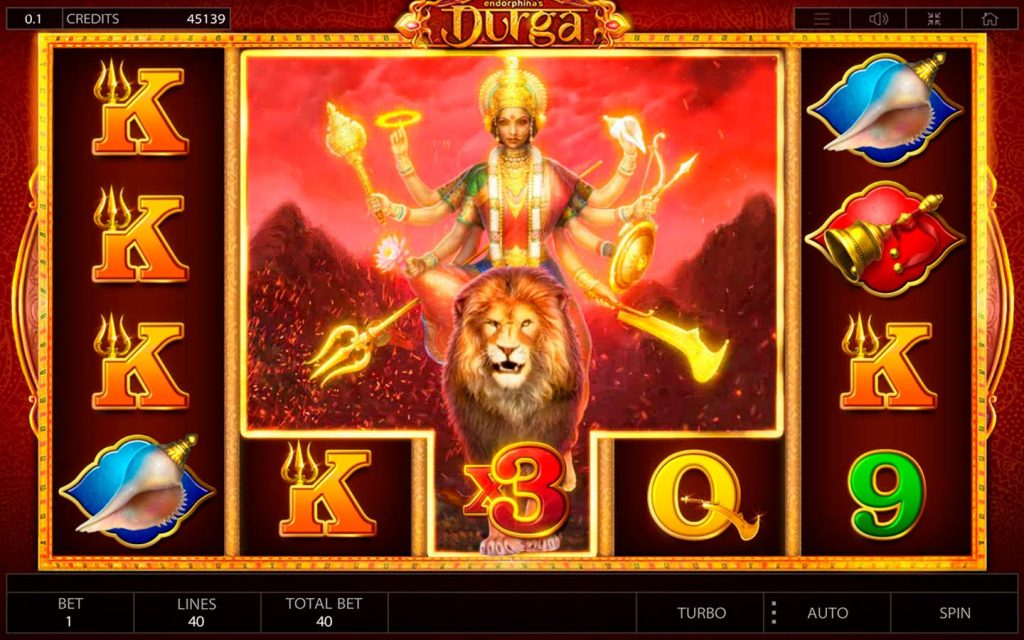