Neil Chabut, Owner & Founder of EBC, in an email to distinguished Hindu statesman Rajan Zed, who spearheaded the protest, wrote: “…Our first response is one of apology to the Hindu community, especially our neighbors in Dayton, for any hurt we may have caused. Upon approving the design of this beer, our intent was not one of frivolity or marginalization… We realize now that there was a much wider audience that needed to be considered in regards to this design, and all designs, and apologize for our lapse in judgement… We will be removing the existing Samsara label from our portfolio and have already begun the process of designing a new label void of any usage of Hindu deities, concepts or symbols…”

Zed, who is President of Universal Society of Hinduism, in a statement in Nevada today, thanked Chabut and EBC for understanding the concerns of Hindu community which thought image of Lord Ganesh on such a product was highly insensitive.

Zed had earlier said that inappropriate usage of Hindu deities or concepts or symbols for commercial or other agenda was not okay as it hurt the devotees.

Rajan Zed had indicated that Lord Ganesh was highly revered in Hinduism and he was meant to be worshipped in temples or home shrines and not to be used in selling beer. Moreover, linking a deity with an alcoholic beverage was very disrespectful, Zed added.

Hinduism was the oldest and third largest religion of the world with about 1.1 billion adherents and a rich philosophical thought; and it should not be taken frivolously. Symbols of any faith, larger or smaller, should not be mishandled, Zed had noted.

It was deeply trivializing of immensely venerated Hindu deity Lord Ganesh to be portrayed on a beer label with what appeared to be a hop flower on his head and one hand, rye bunch in another hand, and mash brewing paddles on other two hands; Rajan Zed had stated.

In Hinduism, Lord Ganesh is worshipped as god of wisdom and remover of obstacles and is invoked before the beginning of any major undertaking. There are about three million Hindus in USA.

EBC, whose tagline is “Brew Goodness”, claims to be “Dayton’s first and only customer brewing facility and nano-brewpub”, where “YOU can be the brewmaster” (Anyone over the age of 21 is welcome to come in and brew their very own batch of beer). 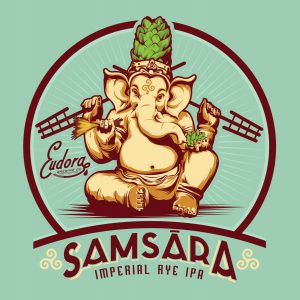