OSWEGO — Dr. Alok Kumar, distinguished teaching professor of physics at SUNY Oswego, has gained much attention for his 2014 book on ancient Hindu science and math and their influence on the Western world. Now, he’s made the work more approachable for more readers.
Kumar’s new book, “Ancient Hindu Science: Its Transmission and Impact on World Cultures,” details how ancient Hindu science and math brought the world knowledge about such subjects as planetary movements, the practice of yoga and much more.
His current publication seeks to condense his exhaustive research by focusing on the important impacts and contributions — such as innovations in cataract and cosmetic surgeries — ancient Hindu scientists contributed to Western medicine, science and mathematics.
At 212 pages, “Ancient Hindu Science: Its Transmission and Impact on World Cultures” is a more concise text compared with the 464 pages of Kumar’s 2014 book, “Sciences of the Ancient Hindus: Unlocking Nature in the Pursuit of Salvation.” The earlier work is a very expansive look into Hindu science and its contributions to contemporary sciences, medicine and math.
Reviewers of the first book were generous, both in India and the United States. The publisher of the new volume says the writing generates a sense of approachability.
“The (new) ‘Ancient Hindu Science’ is well documented with remarkable objectivity, proper citations and a substantial bibliography,” writes Morgan & Claypool Publishers. “It highlights the achievements of this remarkable civilization through painstaking research of historical and scientific sources. The style of writing is lucid and elegant, making the book easy to read. This book is the perfect text for all students and others interested in the developments of science throughout history and among the ancient Hindus, in particular.”
‘Incomplete’ story
Kumar was born and educated in India, where he earned his doctorate at Kanpur University in 1980. Later, he taught at California State University at Long Beach and joined SUNY Oswego’s physics faculty in 1992. He has taught in higher education for more than three decades, and has about 75 peer-reviewed publications.
“I realized as a young teacher that the history of science that we taught was incomplete and, if I use a stronger word, wrong,” Kumar said.
Kumar’s most recent book details such key Hindu discoveries as the base ten number system, the concept and function of zero, and critical understandings of astronomy in the mapping of Earth’s sky.
He has consulted a vast number of primary documents to support his thesis of the importance and impact Hindu sciences and math have had on modern-day technology and our way of life. The purpose of such a book today, he said, is to inform audiences of just how much is learned and modeled after the ancient scholars’ teachings.
“This publication allows for readers to know the roots of humanity in science. This is how I wish to close the gap of our understanding the history of science in the context of India,” said Kumar.
Also, Kumar’s recent publication, “Ancient Hindu Science: Its Transmission and Impact on World Culture,” furthers his quest for continuous growth in scholarship. In his writings and his teaching, Kumar seeks to globalize learning.
“I aim to teach my students history and the impact of Indian science and math through storytelling. If I were to tell a child that the numeral system we use comes from India, that child will then ask what is India, and just from that small passing of knowledge, the door of globalization has been opened,” he said.
Kumar’s books are available on Amazon.com and other Internet retailers.
PHOTO CAPTION: ‘Roots of humanity’ — SUNY Oswego’s Alok Kumar, distinguished teaching professor of physics, has condensed his findings on the science and math contributions of the ancient Hindus to focus on how they came to make deep impacts on the modern world. 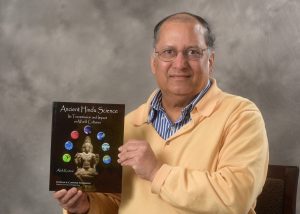