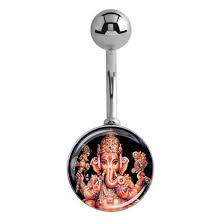 Distinguished Hindu statesman Rajan Zed, in a statement in Nevada (USA) today, said that Lord Ganesha was highly revered in Hinduism and was meant to be worshipped in temples or home shrines and not to adorn one’s belly button or used as a “navel toy” or become a tool for “sexy navel fashion”. Inappropriate usage of sacred Hindu deities or concepts or symbols or icons for commercial or other agenda was not okay as it hurt the devotees.

Zed, who is President of Universal Society of Hinduism, also urged The Belly Ring Shop (Tummy Toys) and its CEO to offer a formal apology; besides withdrawing from sale belly-button/navel/belly-piercing rings and belly-button/belly/navel bars carrying images of Lord Ganesha.

Zed further said that such trivialization of Hindu deities was disturbing to the Hindus. Hindus were for free artistic expression and speech as much as anybody else if not more. But faith was something sacred and attempts at trivializing it hurt the followers, Zed added.

In Hinduism, Lord Ganesha is worshipped as god of wisdom and remover of obstacles and is invoked before the beginning of any major undertaking. According to 2016 Census, there were 440,300 Hindus in Australia. Hinduism, second fastest-growing religion in Australia, is its fourth largest.

Ten belly-button/navel/belly-piercing rings and belly-button/belly/navel bars on this retailer’s website were seemingly named on Ganesha and carried the image of Lord Ganesha and were priced between $5 to $14.90.

The Belly Ring Shop (Tummy Toys), which calls itself “Australia’s trusted” “The MEGA Belly Bar Shop”, was founded in 2008. It describes its jewelry as “essential sexy navel fashion”, states to have 6,000+ belly bars and its Mission includes “no belly button is left without sensational bling”. Helene Holtsbaum is the owner.