Distinguished Hindu statesman Rajan Zed, in a statement in Nevada today, said that Lord Ganesh was highly revered in Hinduism and was meant to be worshipped in temples or home shrines and not to adorn one’s crotch. Inappropriate usage of Hindu deities or concepts or symbols for commercial or other agenda was not okay as it hurt the devotees.

Zed, who is President of Universal Society of Hinduism, also urged “Customon” to offer a formal apology, besides withdrawing Lord Ganesh underwear.

Zed further said that such trivialization of Hindu deities was disturbing for the Hindus. Hindus were for free artistic expression and speech as much as anybody else if not more. But faith was something sacred and attempts at trivializing it hurt the followers, Zed added.

Both, Ganesh Thong and Ganesh Pantie for women, were priced at $18.64 each. Ganesh Thong’s “Product Info” stated that “you can be sexy with this well-formed under garments”. Customon, which claims to be “one of the leading custom t-shirt digital printing and embroidery services in the industry”, has another office in Eatontown (New Jersey). Its products include t-shirts, tank tops, hoodies, sweatshirts, hats/caps, underwear, phone-cases, mugs, etc. 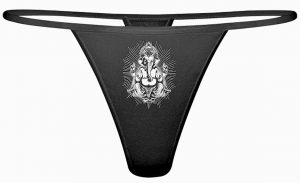