The different dance forms of the state of Haryana are briefly described as follows;

This dance from is dedicated to Lord Krishna, an incarnation of Lord Vishnu. Krishna had stated that the Gopis or maids of Braj are the finest examples of human beings. The dance is very common and extremely popular in the Braja area of Faridabad district.

In this dance, the maids dance in spiritual ecstasy around the idol of Lord Krishna, in a circular manner. The rhythm of the dance is so perfect that the anklets, bangles and bells, worn by the dancers, create the tinkling sound in perfect unison. The dancer sways their body in complete ecstasy around Lord Krishna.

The Phag or Phalgun dance is performed by the agricultural folk of Haryana, in the months of February-March. During this time, there is a bit of leisure time for the folks, between the sowing and harvesting period.

This dance celebrates the harvest of the farmers and is essentially an expression of joy and bliss.

The men sport the most colourful and best of their turbans during the performance, while the women wear colourful traditional costumes.

The dance is performed in the Dhamal style of Haryana, which is a combination of song and dance. There are different songs for the male and the female performers. 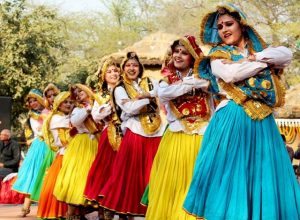 The Daph dance is also directly related to the agricultural folk and their harvest. Usually celebrated in the spring season, both men and women participate in this dance.

The Dhamal dance is performed in the month of Phalgun and is an expression of the deeper emotions of the people. The themes of the song are usually love, labour, joy, sorrow, hope and aspiration.

This dance form is very popular among the people of Mahendargarh, Jhajjar and the Ahirs of the Gurgaon. The origins of the dance may be traced back to the Mahabharata.

The dance is performed in open spaces on moonlit nights, with the accompaniment of instruments such as Dholak, Been, Sarangi, Khartals and Drums.

The orchestra starts playing the folk tunes in the beginning and they are steadily joined by the dancers in a circular pattern. 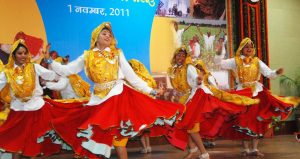 The Loor dance is usually performed in and around the festival of Holi. It is very popular in the Bangar, Bagar and Dadri areas of Haryana.

This dance is exclusively performed by girls, who stand in two rows facing each other in a semi-circular pattern.

Also must checkout temples of haryana

It creates a very joyous occasion and is heartily celebrated by the performers. 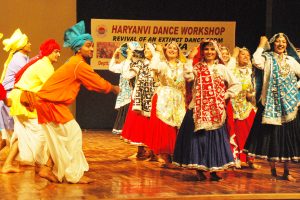 The Gugga dance is dedicated to Gugga Pir by his ardent devotees. This dance festival is celebrated in the month of Bhadon.

The five Bhagats are the main dancers during the occasion and the dance itself is very simple in nature. It is an exclusively male dance form and is very popular throughout the northern parts of India.

Gugga Kicchari or long bamboo sticks are taken out during the procession, which are decorated with garlands, fans and colourful pieces of clothes.

The musical instruments accompanying the dance performance are Deru, Manjira, Dholak, Chimta and Cymbals. The feet of the dancers move according to the song sung by the Bhagats and slowly increase in tempo, with the dancers lashing out iron chains on their chests.

The Jhumar dance takes its name from the ornament Jhumar, worn by the married women. This dance is popular throughout the state of Haryana.

Owing to its similarity with the Gidda, a popular Punjabi dance, it is also known as Haryanvi Gidda. The dance is usually accompanied with the Dholak and Thali.

Ghumar dance is very popular in the state of Rajasthan and owing to its proximity, has become popular in Dadri, Laharu, Hissar and Bhiwani districts of Haryana.

The dance is exclusively performed by women on the occasions of Diwali, Holi and Gangor Puja. The women devotees carry brass plates full of offerings to the temple.

They arrange themselves in a circular pattern and start singing. The accompanying musicians begin to strike a chord and as soon as rhythm and tempo gain momentum, the dancers form a circle and start to sing and dance in a graceful manner. They sway their bodies in devotion to the deity of the temple.

The Khoria dance is a variant of the Jhumar dance and is exclusively performed by women. This dance is very popular in certain parts of central Haryana.

The dancers wear gleaming gold-work skirts and colourful chunries. One of the dancers begins by singing a folk song and is followed by the rest of the dancers to form a circular arrangement.

The performance slowly gains momentum, until some of the dancers break away from the circle and begin to sway their bodies. The performance is related to the daily lives and harvest of the local people.

The Holi dance is performed on the occasion of Holi, in the spring season. This dance is very popular in Faridabad, Pulwal and Ballabhgarh. It is performed by both men and women.

It has various formations and variations, the most popular being the free style variety. Instruments such as Chimta, Khartal, Jhajh, Dhol, Thalis and the anklets on the feet of the dancers create a beautiful rhythm.

There is an atmosphere and mood of light heartedness during the performance of this dance.

The Gangor Puja dance is usually performed in the months of Phalgun and Chaitra and is dedicated to Iswar (Lord Shiva) and Gangor (Goddess Parvati). It is performed during the Puja ceremony held to worship the Gods for a rich harvest the following years.

The dance festival is especially popular in the areas surrounding the border of Rajasthan.

The dance is performed for hours by the women, who adorn themselves with colourful dresses and jewellery, and carry brass jars on their heads and move in a circle.

The dancing pattern changes in accordance to the music and smile is considered to be an important element of this performance. In some occasions, the dance usually takes the form of a Kirtan, dedicated to the deities.

The state of Haryana has a very rich tradition and heritage of folk music. There are many villages which are named after classical ragas. They are as follows:

The folk music in the state of Haryana is primarily divided into two categories i.e. the Classical Form and the Country-Side music.

The most popular musical instruments accompanying the folk music are as follows: