In: Goddesses
With: 0 Comments

Goddess Durga! You, who are the remover of distress of those who take refuge in you; we, who have no other saviour, protect us who are eternally being swallowed by the python of endless anxiety, in the insurmountable difficulties of life. —Tripura Rahasya 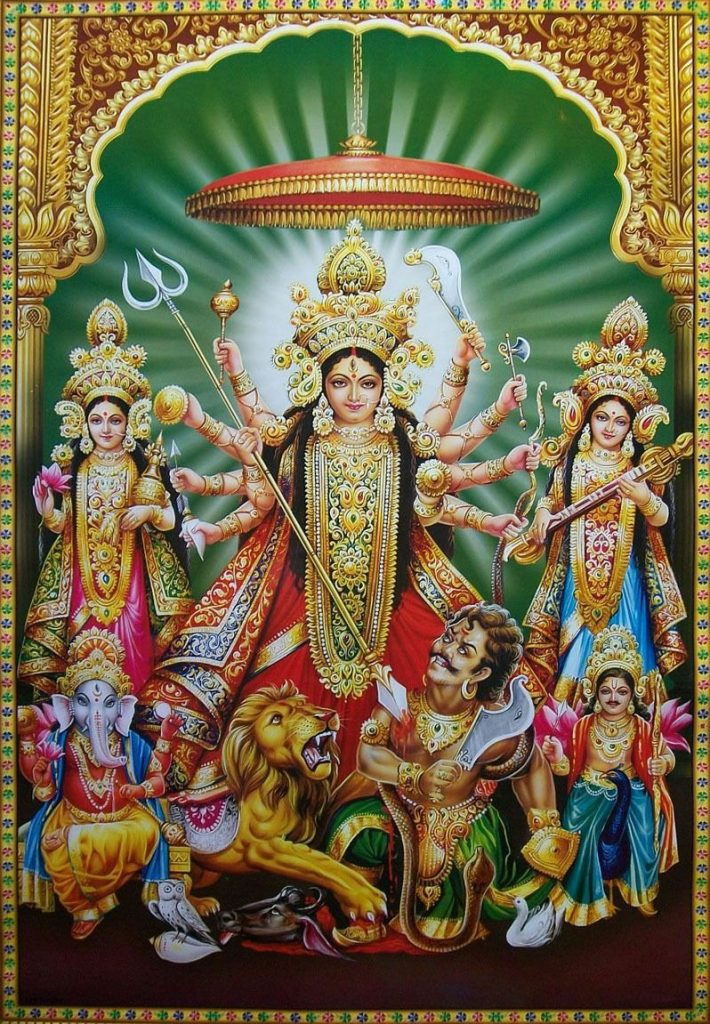 A layman may ask, is the worship of Divine Mother, or for that matter any worship, capable of bestowing some tangible result on the ordinary votary?  Well, the answer can be gathered from specific Hindu scriptures which elaborate on the power of Divine Mother. One of the most important books of the Devi cult is the Devi Mahatmyam, also known as the Chandi or the Durgasaptasati. In thirteen chapters and seven hundred verses, it deals with the glory of Devi and her exploits in killing tyrannous demons, interspersed with fine hymns dedicated to her. Some of the practical hints given for the spiritual benefit – woven around the glorious story of the goddess – are as follows. 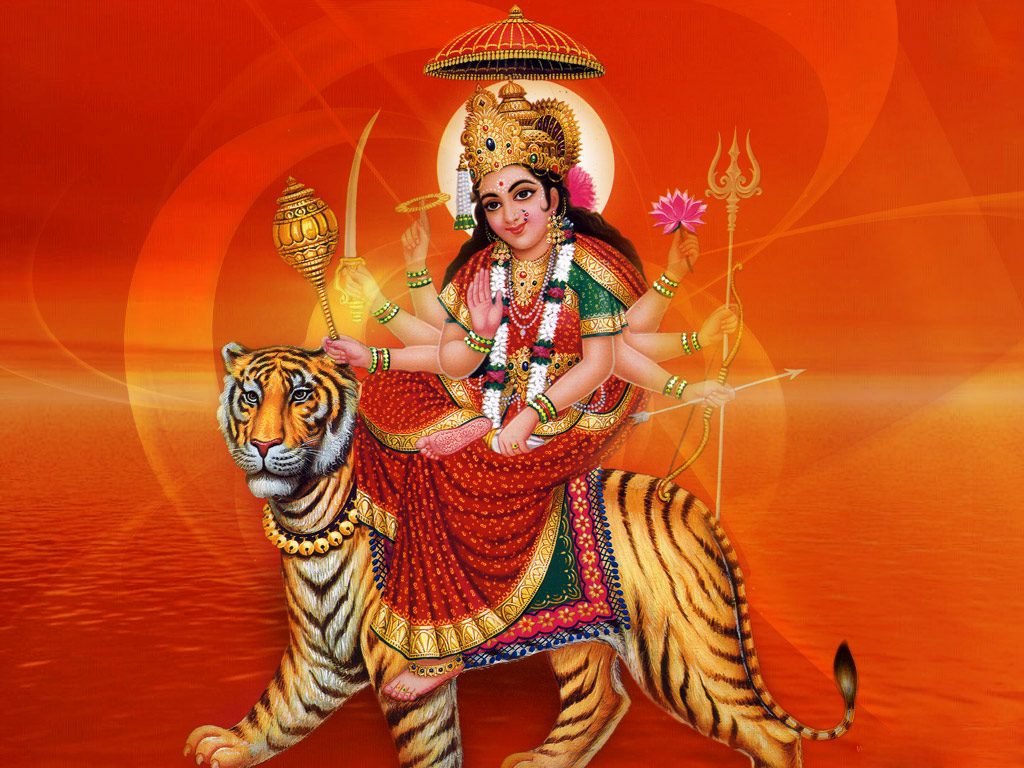 In the beginning of the universe, Adi Para Shakti created three masculine forms of herself, called Brahma, Vishnu and Shiva and assigned Brahma for Srishti (creation) and Vishnu for Sthithi (maintenance) and Shiva for Laya (dissolution). After allotting the cosmic task, she vanished into eternity.

Satyaloka was located on her forehead; the created universe was her hair; the sun and the moon were her two eyes; the four directions were seen in her eyes; holy Vedas flowed out from her mouth, taking the shape of words; death, emotions and affinity were her teeth; maya was evidenced through her smile. This ethereal beauty revealed that all the gods and goddesses, including the Trimurti (Brahma, Vishnu, Shiva) and Tridevi (Parvati, Lakshmi, Saraswati), are merely her various forms.

Upon seeing this, the Trimurti recognized that Adi Para Shakti has bestowed upon them all the three powers. Brahma, Vishnu and Shiva are indeed the personification of the Divine Mother – Adi Para Shakti. She is the undivided part of Trimurti. She is omnipresent, with Shiva as Parvati, with Vishnu as Lakshmi, and with Brahma as Saraswati.

The enlightened Trimurti thus began carrying out the functions of Srishti, Sthiti and Laya Karyas.

This story, in praise of the Divine Mother, the Great Goddess, commences with King Suratha pacing about listlessly. King Suratha is the symbolic representation of every living man on earth as he is inquisitive about two basic questions in life, ‘who am I and what the purpose of my existence is?’

The background of King Suratha’s story is that, his kingdom has been lost and he has lost his apparent direction as a ruler. Although he has sought refuge in a forest hermitage, he fails to notice and admire its serene environment and peaceful animals. He instead starts missing his lost territory, his magnificent war-elephant and wonders whether anyone is taking proper care of him? He sighs on thinking of his subjects being ill-treated by the treacherous men who had usurped his kingdom.

The following story unfolds how this mentally frustrated king eventually evolved to become the legendary Manu Savarni, the most prominent sage of the eighth Manavantara (a part of the creation cycle).

The wealthy merchant introduced himself as Samadhi. They eventually opened up to each other, and the merchant told Suratha how he had been expelled from his own house by his unfaithful wife and covetous sons. He also told Suratha that despite being cheated by his family, he cannot stop loving them. Both Suratha and the merchant subsequently decided to seek advice of the great Rishi Medhas.

King Suratha, who was obsessed with his kingdom, and his merchant friend, who was obsessed with his selfish family, eventually confided unto Rishi Medhas. The king requested the Rishi to show them a spiritual vision. Both the disciples also explained to the Rishi how their minds were always drawn by self-centred thoughts even though they could understand it is foolishness.

The Rishi then enlightened them saying that illusion is the power of Mahamaya which binds all creatures during their lives. This illusion, in fact, makes them believe that their existence is permanent. Amid this turmoil of illusion, they forget that in reality, it is Adi Para Shakti – the Great Goddess and Devi – who actually creates, protects and destroys all beings. She is the one who causes the meditative sleep of Lord Vishnu at the final stage of Golden Age. She is the only authentic Mahamaya, the Great Illusion, present in the universe. She has created this universe, brought it to shape and her blessings can only lead the mankind to its final emancipation. Her Supreme knowledge is the eternal cause of bondage and liberation in all living beings.

The legend of Shakti as Yoga Nidra 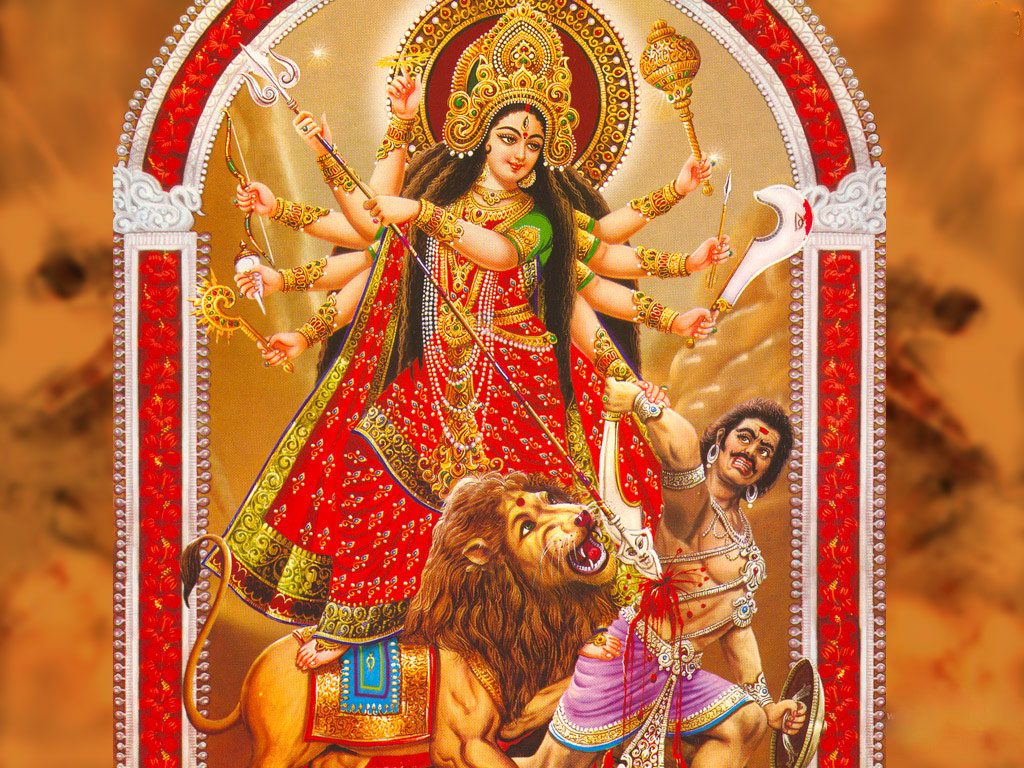 In the closing stages of the Golden Age, when Lord Vishnu reclines on his favourite Serpent-couch, aka Sesha, Shakti comes in the form of Vishnu’s divine sleep. Hence, she is also named Yoga Nidra. Taking advantage of Vishnu’s longstanding sleep, the two ferocious demons, named Madhu and Kaitabha, enter his ears and leap out to kill Lord Brahma who was resting on the lotus of the Vishu’s naval.

Lord Brahma then prays to Shakti or Yoga Nidra to save him from the assault of Madhu and Kaitabha. Brahma praises the goddess as the original creator, maintainer and destroyer of the universe who has caused sleep unto Lord Vishnu and become the adored consort of Vishnu.

Brahma thus invokes the goddess and begs her to withdraw herself from the eyes of Vishnu and awake him. Vishnu rises from his deep sleep and kills the two asuras after fighting with them incessantly for over thousands of years.

Moral of the legend

Thus, the anecdote of Suratha and Samadhi gives us interesting clues to our life. First of all, we need not consider our sufferings in life as meaningless. They have a divine purpose. Through them, we learn the true lessons of life and become aware of a higher Presence. With the awareness of a Presence and a Purpose, much of our suffering will lose their sting. We will be able to face the darker side of life squarely. With a stable anchor, the imaginary worries will drop away, and the mind will be fit for contemplation and faith. Faith is of two types—the faith of realization and the faith of preparation. The former is unshakable and is the fruit of illumination. Preparatory faith can also be developed gradually into this. The method generally sought is through intellectual conviction. But the way of the heart is more potent, especially for despondent souls. Assert faith right now and you have it. By repeated assertion in every undertaking of the day, faith becomes stronger and stronger and possesses the entire soul. This facilitates meditation. The mind habituated in the application of faith naturally enters into meditation of the Lord. Moreover, feeling the presence of the Lord is itself contemplation. When the mind is thus directed purposively to a divine object, control of it is achieved. That is the goal of all Sadhana. Wherever the concentrated mind is directed, success is achieved. When it is directed towards god, the highest illumination is obtained. Devotion, worship, faith and religion help man to have a rich, healthy and peaceful life, which is so much coveted by an ordinary man of the world. But they become significant only when they hold to the supreme ideal of life; religion is religion when it leads a bound soul to the final liberation. The Chandi gives us these grand lessons through the fine anecdote of Suratha and Samadhi.

The annual worship of the Divine Mother is celebrated throughout the country during the festival of Navaratri, which falls in the autumn. During this nine day festival, followed by Dasara on the tenth day, she is worshipped in different parts of India, in different forms. Various forms of Adi Para Shakti are present in the Hindu religion, and she is propitiated in accordance with faith and devotion of various regional cultures. Be it in the form of Durga or Kali, Ambe or Gauri – Adi Para Shakti is present everywhere during this national celebration. She also resides in the psyche of a common man, which is otherwise burdened with the worries and anxieties of life.