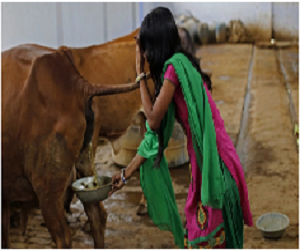 Cow dung, is the waste product of our holy mother Cow. Cow dung is used as a fertilizer for proper growth of plant and trees, and it considered as a holy product, since it is derived from the noble animal cow. Cow dung is rich in minerals, and it would be made to dry, and it would be used as a fertilizer for agricultural products and also would be used in replacement of firewood. In some foreign countries, it is used for generating fuel and electricity. The by-product of the cow is called as Gomiyam and Gomutra, and it is used by the people since ancient times.

Cow dung is also used while constructing small mud houses, especially for poor and under privileged people in the villages.  Cow dung is mainly used in the ritual Yagnas, and it is also used to make nice pots, and in that we can grow small plants like Tulsi.

Similar to the cow dung, Gomutra also called as cow urine, is mainly used for medicinal purposes, and it would help us in curing our fever and body pain and also cures our various ailments.  It also gives great strength to the pregnant women, and makes them to appear healthy and cheerful. Cow urine is used as a medicine in India as well as in some foreign countries also.

Using the urine of a pregnant cow is considered as very good, since it contains various types of minerals. Ancient Ayurveda Physicians have also advised us to consume Gomutra for improving our health condition.

Cow urine cleanses the sins committed by us, and also removes all the unwanted toxins from our body, and it controls diabetes and blood pressure and also saves the people from heart attacks. It also turns the bad people into good, since Cow is considered as the sacred Gomatha, who is an incarnation of Ma Shakti Devi, also called as Durga Devi.

With Gomutra, we can prepare products like Ayurvedic soaps and shampoos which are very good for our health, and it contains no side effects. It is also believed that our ancient kings and queens used to drink Gomutra, in order to get noble and a healthy child for them.

In our ancient Hindu texts the details about Gomiyam and Gomutra is mentioned.

Cow is a sacred animal and it is believed to be the descendent of the divine cow Kamadhenu which lives in the Indra Loka. Kamadhenu is our divine cow mother, who gives whatever we require in our life. Similar to her, the cow living in the earth also gives all sorts of goodness to us like milk, butter, curd and also its by-products, dung and urine are used for medicinal purposes. Hence it is also treated to be the divine cow Mata Kamadhenu.

There is a sloka for the great Madhwa saint and the universal guru Sri Raghavendra. In that Sloka, he is compared similar to the divine tree Kalpavruksha and the Holy Kamadhenu, with regard to fulfilling the wishes of his devotees.

The meaning of the sloka is as follows:

I worship Guru Raghavendra as the Divine tree, Kalpavriksha, and consider him as the Holy Cow Mother Kamadhenu, and Guru Raghavendra is the good example for following the principles of Dharma. He shines like a brilliant sun and he has won in the debates, and acts as a protective shield for the Vishnu bhaktas. I once again offer my humble salutations to the great and marvellous Guru Sri Raghavendra Swamigal.