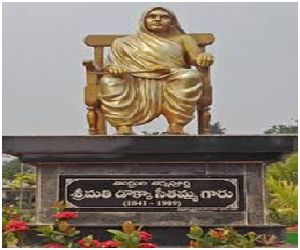 Dokka Seethamma (1841–1909) is considered as a great saint, and an incarnation of Ma Annapoorna, who had dedicated most of her life towards serving food to the hungry travellers and to the poor people. She was a devotee of Lord Shiva and Ma Shakti, and used to regularly visit temples, and performs puja, Abhishekham and offers flowers to the Holy Shiva Lingam.

She used to cook food with her own hands, and people who consumed her food, considered that as a divine Prasad, and would eat plenty of meals in her divine hands, and people who suffered from various health issues were relieved from their diseases, and they got good strength in their mind and body.

Seethamma was born in the year 1841 in a village, in Andhra Pradesh, and at her young age itself, she was married with Dokka Joganna, who was a wealthy farmer, and a pious person, and he had allowed her to provide food to the poor people, and she has done this selfless service for more than 40 years, with eagerness.

At her old age, she had donated all of her wealth to the poor people, and went to Varanasi, settled there and died there peacefully during the year 1909. The British government was very much pleased with her noble service, and hence the British Officials were invited her to Delhi in order to honour her, but she humbly refused the invitation, and instead of that, she gave King Edward a photograph of her, and then the king enlarged and framed the photo, and kept it in his office.

Seethamma’s generosity cannot be explained in words, since she didn’t concentrated much on worldly affairs, but focussed her attention mainly on doing charitable activities. A statue of her was installed in Andhra Pradesh, in order to recognise the valuable service done by her to the society. Still in some Andhra Pradesh villages, people are worshipping MA Seethamma as MA Annapurna, by placing her picture in their puja room. It is believed that, still, she provides food to her poor devotees by taking any other form, if they sincerely worship her. Similar to worshipping MA Annapurna, we can also worship her in order to avoid from starvation.