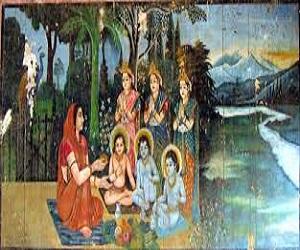 Sati Anasuya, the wife of Sage Atri, is one of the Seven Great Women i.e. Sapta Kanya of the Hindu religion. Though, she is not amongst one of the Pancha Kanya, as part of the Hindu ritual, she is supposed to be remembered first in the wee hours of the morning. Sati Anasuya is an epitome of chastity and austerity, qualities which every Hindu woman should strive to achieve for a fulfilled life. As mentioned in our ancient Indian scriptures, such were the powers of Sati Anasuya that she made trees bear juicy fruits and Ganga flow abundantly during the times when the land was struck with the deadliest droughts and famines.

The life of Sati Anasuya

Sati Anasuya was the wife of Sage Atri, one of the Saptarishi (Seven Sages) of the Saptarshi-mandala. The couple was deeply devoted to each other and their life story still set as a testimony during important Vedic rituals, including marriages.

Sati Anasuya was blessed with three sons, each with distinguished qualities. They were –

o   ‘Dattatreya’ the sage-avatar of Brahma, Vishnu and Shiva;

o   the irascible Sage Durvasa and;

Sati Anasuya was the sister of one of the Seven Sages, Sage Kapila; her parents were Sage Kardama and Devahuti.

In Ramayana, Sati Anasuya appears living in the forest of Chitrakuta with her husband in their small hermitage. When Lord Rama and Sita visited Chitrakuta during their exile period, they specially met Atri-Anasuya to seek their blessings. The couple invited Lord Rama and Sita with great pleasure. In course of her meeting with Sita, Sati Anasuya taught her that the highest duty of a wife is to serve her husband with austerity and devotion. She also gifted Sita a sacred garland, pious sandal paste, and a sublime gem which the latter accepted with great respect.

Dattatreya – The son of Sati Anasuya

There are two legends describing how the Trinity – Brahma, Vishnu and Mahesha (Shiva) became the sons of Sati Anasuya.

As per this legend, Sati Anasuya had the powers to perform miracles by sprinkling ‘Paadha Theertham’, the sacred water with which she washed Sage Atri’s feet. However, when Sage Narada narrated this fact to the three Devis i.e. goddess Saraswati, Lakshmi and Parvati they were unable to believe it. They, therefore, decided to test the chastity of Sati Anasuya. Saraswati, Lakshmi and Parvati involved their husbands Brahma, Vishnu and Shiva respectively in the plot.

When Sage Atri returned to his hermitage, Sati Anasuya narrated to him what all had happened in his absence and presented the three babies to him. Sage Atri, through his divine vision, envisioned the Holy Trinity – Brahma, Vishnu and Shiva in the three babies. Sage Atri said to his wife that they have come to fulfill her wish to become their mother. The three babies then  conjoined to become one. They occupied three separate heads, one trunk, two legs and six hands. When the three devis learnt the incident from Sage Narada, they went to Atri and Sati Anasuya to get their husbands back. Eventually, Brahma, Vishnu and Shiva returned to their respective consorts. Simultaneously, they fulfilled the wish of Sati Anasuya and remained in the conjoined form as her child. The child grew up to the one of the greatest sages of all times. He was named Dattatreya, and he served his parents till the end.

Well, there are numerous anecdotes and commentaries on Atri and Anasuya in the Mahabharata. Although the stories of the unflinching devotion of the rishis are manifold, devoted wives are numerous too, if not equal. Sati Anasuya was one such exemplary contemporary figure. Besides her, Sumanthi too had earned her place as an earnest devotee. She lived in Prathishtanagara. She was completely loyal to her husband Kaushika and remained devoted to him even when he fell into bad ways and contracted many ailments. Sumanthi would carry him on her back and wander from one place to another.

One day a number of thieves escaped from the king’s soldiers. While they were searching for the thieves they mistook a sage named Mandavya to be the thief and presented him to the king. Angry king thoughtlessly ordered to stab him to death and the king’s men carried out the royal order. However, Mandavya was not a normal human being and did not die as a result of his great power of tapas; he remained hanging on the stake.

In the meantime, Sumanthi was passing by the same place carrying her husband on her back. Unfortunately, she failed to notice the sage hanging on the stake and her husband’s foot touched Mandavya body. That gave the sage severe pain and he got raged. He pronounced a curse on Kaushika saying “May you fall dead at sunrise”.

The sage’s curse was justifiable, but Sumanthi could not afford to lose her husband at any cost. Hence, Sumanthi – all powerfully – cried a loud, “Let the sun never rise” The words of this pious lady came true and the sun didn’t rise the next day. The whole world came to a standstill and life on earth was in mayhem. The survival of living beings stood at risk.

The Devas, in heaven, always think of the welfare of the human beings. So do the great rishis of ancient India. They were aware of the fact that the curse of a devoted wife could be broken only by another devoted wife of similar stature. Hence, all the Devas along with Lord Brahma arrived at the ashram of Atri. Together they sought Anasuya’s help in persuading Sumanthi to withdraw her curse and save the world from destruction. Sati Anasuya requested Sumanthi to take back her curse and thereby save the world. Sumanthi was in a deep dilemma because that way her husband would die. Finally, Anasuya thought of resolving the situation. She assured Sumanthi that she would save her husband from death. Sumanthi relented after the assurance and Anasuya with her unequaled power of tapas (meditation) saved Sumanthi‘s husband and as a corollary the world was saved.

After this incident, all the gods and goddess in the heaven were extremely pleased with Anasuya and granted her a boon. In her boon, Anasuya asked the holy Trinity – Brahma, Vishnu and Shiva as his sons. Her boon was consensually granted she gave birth to Dattatreya, the sage incarnation of the Trinity.

Sage Atri was amazed and proud of his wife’s celestial power. Later, when Sri Rama visited Atri’s ashram, Sage Atri proudly narrated Anasuya’s virtues to the Lord. He never felt jealous of his wife when her stature grew in the eyes of Gods. Atri and Anasuya are almost synonymously worshipped today. At first every day – ‘Sapatrum prapoojayet’ pronounces our traditional literature when it refers to this couple. The mantra quotes Anasuya’s unstinted devotion for Sage Atri and this gesture escalates Atri‘s status to acme.

These two great souls were always engaged in maximizing the happiness of the humans at large. Their lives are inscribed in golden letters in the traditional landscape of this country. It is indeed amazing to understand the nature and the quantum of pain and hardships these outstanding humans had to endure for seeking universal welfare.

Sati Anasuya Ashrama, the holy abode of Sati Anasuya, is located in Chitrakuta near Mandakini River, amidst the thick forest. As mentioned in the epic Ramayana, one Chitrakuta and the region surrounding the River Mandakini was struck by severe draught for ten long years. Seeing the sufferings of the sages and animals, Sati Anasuya decided to use her divine powers and through her austerities she succeeded in bringing the River Mandakini down on earth. At present, Sati Anasuya Ashrama is one of the most peaceful places on earth where various streams converge to form the River Mandakani. This point is the starting point of the forest Dandaka, which was once ruled by King Ravana, the King of Lanka.

The popularity of Sati Anasuya

The character of Sati Anasuya is looked upon by all the Hindu women as she is the epitome of the austerity and devotion. Many regional Indian films have successfully depicted the story of Sati Anasuya. A film on her was made in the following chronological order –