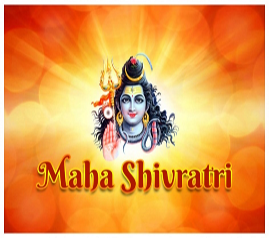 Maha Shivaratri is a  festival which is celebrated once in a year, in order to honour Lord Shiva. As per legend, it is believed that during the time of Maha Shivaratri, Lord Shiva would dance at his abode Holy Kailash, in order to bring peace and prosperity to the entire universe. Apart from the annual Shivaratri, monthly Shivaratri is also celebrated in the temples, and during that auspicious day, special pujas would takes place.

It is considered as the main festival of Hindus, and especially by the devotees of Lord Shiva, since by celebrating the Maha Shivaratri festival, the darkness in our minds would be removed, and our life would be filled with full of peace and happiness. During the day of this festival, fasting would be observed by the devotees either in their homes or in the Shiva Temples, and chanting of Shiva Mantras such as “OM NAMAH SHIVAYA” also would be done, in order to remember Lord Shiva on that auspicious occasion. The details about the celebration of Maha Shivaratri is mentioned our Puranas, and it is believed that even the Divine Devas would visit the earth in order to get the holy Darshan of Lord Shiva in the temples such as Annamalaiyar Temple, Somnath Temple, Kashi Viswanathar Temple and Srisailam Sri Mallikarjunar Temple. Performing Girivalam during the time of Shivaratri in the Girivalam path of Tiruvannamalai is considered as a most good deed, since lot of divine devas would also be doing the Girivalam in the Girivalam path in an invisible form.

Mahashivratri is popularly celebrated by the spiritually minded people. We must always remember that Lord Shiva forgives lot of mistakes committed by us, and he is acting as our divine father. Similar to our own father, he would hug us affectionately during our difficult times, and would show us the proper path to lead our life without much difficulty. Hence it is our main duty to celebrate the holy Shivaratri festival by visiting the temples of Lord Shiva, by chanting his Mantras, by singing and listening to his songs, and also by the way of doing meditation on him.