Takshaka was a great Nagaraja who was mentioned in the Indian epic, Mahabharatha. He was known for his great powers, knowledge and wisdom. He gained a lot of popularity among other NAGAS. He is the friend of the Lord Indra Deva.

Even though Mahabharata is majorly a story of Kaurava’s and Pandava’s, their exile and war. But, the actual Mahabharata text begins on a very different note. Not many people know how important role Takshaka the Serpent (Naga) King played in Mahabharata. At one point Bhishma’s prowess is compared with him. Takshaka, in the Sanskrit language means the snake which can glide or fly.

The text of Mahabharata itself begins at the Sarpa-Satra yagya (Serpent Sacrifice) organized by Janamejaya, son of Parikshit and grandson of Abhimanyu, to kill all the snakes in the world to avenge Parikshit’s death. Finally, with force of this yagya, Takshaka was brought to the fire. In the end, a learned boy named Astika intervenes and persuades Janamejaya to stop Sarpa-Satra. That’s when Vaishampayana the disciple of Krishna Dwaipayana (Vyasa), narrates the story of Janamejaya’s ancestors.

Takshaka ruled the kingdom near Kurukshetra i.e. Khandavprastha. It was supposed to inhabitable for humans. After Pandava’s were given to rule the Khandavprastha, Arjuna and Krishna went there to take a look. Arjuna using Agneyastra set the whole forest ablaze to kill all the snakes in the region. Mayasura used to live in the forest of Khandavprastha with Takshaka but, Arjuna saved the life of Mayasura. Takshaka had to live Khandavprastha and he settled down in the region far north-west to Kurukshetra. Interestingly the city built by Takshaka was called Takshashila (modern name of the city is Taxila). It is the same Takshashila which was famous for the ancient university.

Takshaka belonged to the Ikshvaku dynasty. He was a descendant of Shri Rama. Takshaka’s son was killed in the battle by Abhimanyu, the son of Arjuna.

Takshaka lived in the Khandav forest. Arjuna burned that forest. At that time the Naga chief Takshaka was not there, having gone to Kurukshetra. But Aswasena, the mighty son of Takshaka, was there. Arjuna slew Takshaka’s wife, the mother of Aswasena. But Aswasena escaped to revenge upon the slaughter of his mother, Aswasena attacked Arjuna during Kurukshetra War , while he was battling with Karna. However Arjuna was escaped from him.

Takshaka held grudge against Pandava’s and especially Arjuna. When the great-grandson of Arjuna, Parikshit was cursed by the sage that he will die due to the snake bite. When Takshaka found out about this curse he approached Parikshit in disguise and bites him. It is also said that he bribed the sages of the line of Kashyapa which were good at healing snake bites, making sure that Parikshit dies. To take the revenge of his father’s death, Janmejaya attacks Takshashila and destroyed whole Kingdom leaving Takshaka homeless. To avenge his father’s death Janmejaya takes the vow to kill all the snakes of the world and arranges for Sarpa-Satra. Finally, when Astika intervened, Janmejaya and Naga’s end enmity between them and began living peacefully once again. The day when Sarpa-Satra was stopped is celebrated as Nag-Panchami till date!

So this was how snakes of the world were saved. Takshaka no doubt, has an interesting story in Mahabharata!

After King Parikshit was cursed by a sage’s son to die by a snake bite for insulting his father, Takshaka came to fulfil the curse. Takshaka did the deed by approaching in disguise and biting Parikshit, the grandson of Arjuna and thus slaying him, while he was meditating on Lord Vishnu. He also prevented the possibility of getting any medical aid to the king, by bribing a priest in the Kasyapa clan, who was an expert in curing people from snake-poisoning.

Kashyapa alive tree what is burnt by Takshak ( near Pond ) and parikshit bitten by Takshak , folio from Birla razmnama.

Later King Janamejaya, the son of Parikshit, fought a war at Takshasila and expelled the Nagas headed by Takshaka from there too.

Utanka soon became another victim while he was passing through the domain of Takshaka. By visiting Janamejaya, Utanka invoked the ire of that Kuru king, which was directed at its full force, towards Takshaka and the Naga race. Janamejaya started a campaign at Takshasila where he massacred the Nagas, with the intent of exterminating the Naga race (1,52). Takshaka left his territory and escaped to the Deva territory where he sought protection from Deva king Indra (1,53). But Janamejaya’s men traced him and brought him as a prisoner in order to execute him along with the other Naga chiefs (1,56). At that time, a learned sage named Astika, a boy in age, came and interfered. His mother Manasa was a Naga and father was a Brahmin. Janamejaya had to listen to the words of the learned Astika and set Takshaka free. He also stopped the massacre of the Nagas and ended all the enmity with them (1,56). From then on, the Nagas and Kurus lived in peace. Janamejaya became a peace-loving king as well.

Takshaka, disguising as a beggar, stole the ear-rings of Paushya king’s queen, which she gave as a gift to a Brahmin named Uttanka. Uttanka managed to get it back with the help of others. He wished to revenge on Takshaka and proceeded towards Hastinapura, the capital of Kuru king Janamejaya, the great-grandson of Arjuna. Uttanka then waited upon King Janamejaya who had some time before returned victorious from Takshashila. Uttanka reminded the king of his father Parikshit’s death, at the hands of Takshaka.

We can attain peacefulness in our life and can be saved from snake bites and poisonous fevers, various chronic fevers by chanting the mantra ‘OM SREE TAKSHAKAYA NAMAHA,OM SREE NAGARAJAVE NAMAHA’ 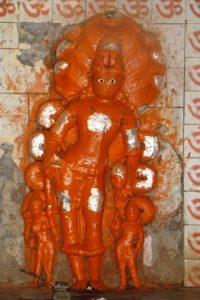