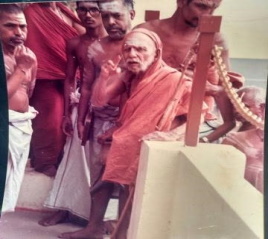 Whenever Kanchi Mahaswamigal, Sri Chandrasekharendra Saraswati Swamigal travels in the streets, his disciples would raise the slogan, “HARA HARA SHANKARA JAYA JAYA SHANKARA”, mantra in praise of Lord Shiva. At frequent intervals, Kanchi Swamigal would go on Pada Yatra, foot walk, and would march to the busy streets of Kancheepuram, and also to the nearby areas along with his disciples and devotees. He used to do like that, for the purpose of “LOKA KSHEMA”, Universal well-being.

Lot of books were published about Kanchi Swamigal, and still devotees discuss about him with their near and dears.  Those who watch the face of Kanchi Swamigal, would get great divine pleasure, and even the bad ones would turn into good. Lot of books were published by Kanchi Mutt, and even these books are available in online platforms, like Amazon.

Though Kanchi Paramacharya observes Hindu rituals in a strict manner, but in exceptional situations, he used to relax those rules. Sometimes, he even used to obtain fruits from the low class people, and after sprinkling it with holy water, he even used to eat it. He is such a great saint, who is free from Casteism! But he would never allow the devotees to touch him, since it is against the principles of touching a highly orthodox saint! But even if anyone forcefully touches his body, then, they would have to surely suffer for their bad act.

But without knowing about all these things, still, some people are commenting about Mahaswami’s cleanliness and purity. Mainly for the purpose of getting money, they are doing like that. They should remember that human life is purely temporary! Those who lived in palaces, enjoyed rich foods, and slept with pretty woman are now no more! For everything there is an end. Hence instead of criticising about the purity of the pious saints like Sri Kanchi Mahaswamigal, let everyone praise him, by loudly raising the slogan, “HARA HARA SHANKARA JAYA JAYA SHANKARA”.

2022-05-02
Previous Post: Visiting The Famous Temples In The World In Just 60 Days
Next Post: Unknown Facts About Lord Hanuman